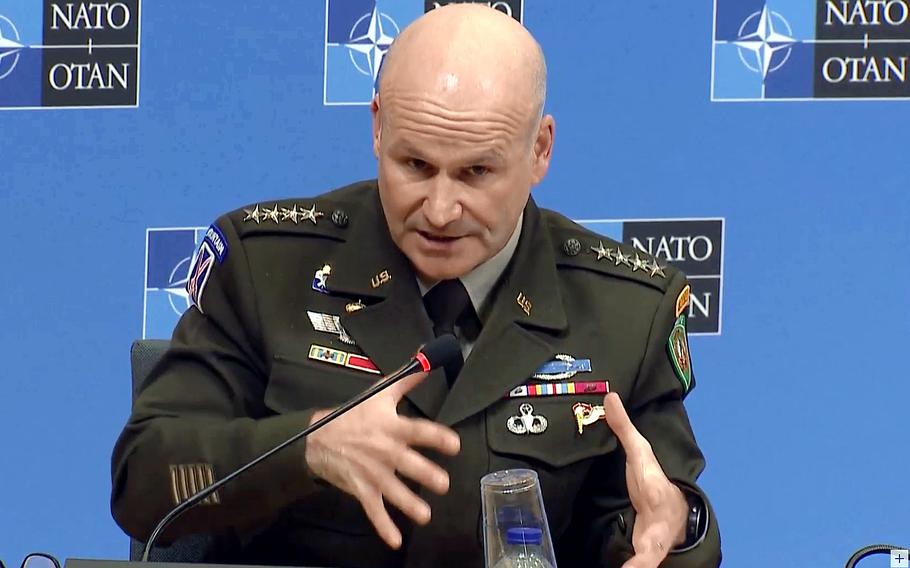 Delivering modern battle tanks to Ukraine won’t diminish the ability of allies to defend their own territory, NATO’s top military officer said Thursday, as tensions mount over Germany’s reluctance to allow its tanks to be used by Ukraine to fight Russia.

“I think we can manage any risks that we’re dealing with,” said U.S. Army Gen. Christopher Cavoli, NATO’s supreme allied commander, at the conclusion of a meeting of defense chiefs in Brussels.

Within NATO, pressure is mounting on members to send more armored weaponry, including tanks. Germany in particular has come under withering criticism for balking at the idea of dispatching its Leopard tanks.

Berlin also is standing in the way of other allies sending Kyiv their own German-made tanks to Ukraine.

If Berlin doesn’t offer permission to transfer Leopard tanks already in Polish possession, “we will do the right thing ourselves,” Morawiecki said during an appearance at the International Economic Forum in Davos.

Germany has said it will send tanks to Ukraine only if the United States sends its Abrams tanks. But U.S. officials said this week that the idea of sending Abrams tanks — which require more complicated training and have unique maintenance needs — is on hold for now.

Instead, Washington is poised to announce another round of military aid for Ukraine involving armored Bradley fighting vehicles and, for the first time, highly mobile Strykers.

Those offerings, along with other gear, add up to more than $2 billion in aid, The Associated Press reported Wednesday. The details are expected to be formally announced during the talks at Ramstein on Friday.

The meeting at Ramstein will mark the second day on the job for German Defense Minister Boris Pistorius, who met Austin in Berlin on Thursday. Pistorius took over after the resignation of Christine Lambrecht, who critics said hadn’t moved forward quickly enough on plans to upgrade Germany’s military.

Meanwhile, Cavoli said neither Western tanks, or any other system, are a “silver bullet” for Ukraine. But tanks would provide an advantage, said Cavoli, who also heads U.S. European Command.

“A balance of all systems is needed. In the end, a tank simply comes down to, conceptually, a balance between firepower, mobility and protection,” Cavoli said, describing that combination as the “holy trinity” for ground forces.

So far, Western weapons have proven superior to Russia’s on the battlefield in Ukraine, and Cavoli indicated he would expect the same to hold true for tanks.

Ukraine has continued to walk a fine diplomatic line in seeking the weapons it needs to drive Russia from its land. Ukrainian President Volodymyr Zelenskyy has praised the United States, Germany and other nations for their help.

But on Wednesday, speaking by video link to a meeting on the sidelines of the World Economic Forum’s annual meeting in Davos, Switzerland, he made reference to “lack of specific weaponry,” adding that “we cannot just do it with motivation and morale.”