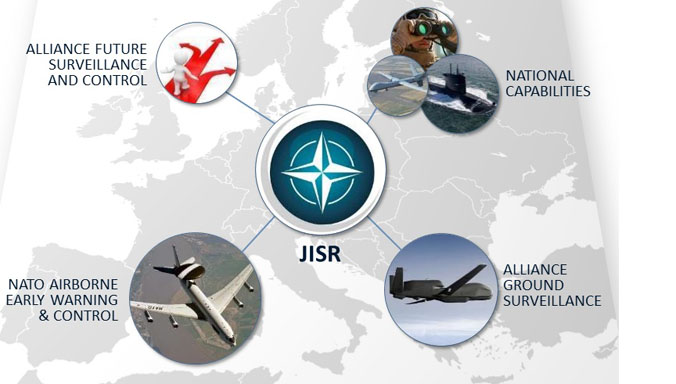 The fundamental nature of war does not change. It always involves a clash of wills, violence, friction, fog, manoeuvres or deception. At the same time, the character of warfare continues to evolve and become ever more pervasive with our competitors conducting activities that sit outside the ‘normal’ peace-crisis-conflict dynamic. Major shifts in warfare are often associated with technological innovation – from arrows to black powder to battle tanks to nuclear weapons to cyber and space systems today. However, a multitude of other underlying factors – political economic, social, cultural, scientific, and industrial – also drive the way nations and alliances think about war, prepare for war and fight.

The environment NATO faces is fluid, global and complex, and the further to the future one looks, the more uncertain it becomes. The boundaries between peace and conflict, political and military, strategic and tactical, kinetic and non-kinetic are blurring. The Alliance no longer has any real sanctuaries or ‘rear areas’ that some form of threat, attack or malign activity cannot penetrate.

Our Alliance has to cope with state and non-state actors that fundamentally oppose, seek to alter or even destroy the rules-based international order and the system of values that NATO was established to protect. Potential strategic competitors seek to undermine the Alliance’s political and military-strategic objectives by deploying increasingly sophisticated strategies, often through coordinated political, military, economic, and information efforts.

New technologies and capabilities are already beginning to turn speculative fiction into reality. Quantum sensing could make oceans ‘transparent’. High-end decryption capacities could make secure communications as open as the front page of a newspaper. Losing control of satellites and the electromagnetic spectrum could degrade Alliance capabilities. Lethal autonomous weapons systems are likely to challenge longstanding ethical and legal norms. These developments are becoming increasingly feasible operational realities of warfare and must be considered as we shape the future NATO strategy.

Since the end of the Cold War, our Alliance has been successfully adapting to changes in the strategic environment. We have adopted an unambiguously defensive approach, for good reason, and we will maintain this approach. However, defensive does not need to equate to passive. In light of the increasingly boundless, simultaneous, and persistent challenges, the Alliance needs to become more anticipatory and proactive. We need to get ahead of the ever more complex anticipated threat curve, or risk losing our freedom of decision and action.

To this end, we need to start thinking, organising and acting differently, so that we can offer better military advice while expanding the operating and decision space for political authorities.

We have already started down this path. In 2019, Allied Chiefs of Defence agreed a NATO Military Strategy. In 2020, General Tod Wolters presented to Allies the Concept for the Deterrence and Defence of the Euro-Atlantic Area (DDA). In early 2021, NATO leadership adopted the NATO Warfighting Capstone Concept (NWCC) produced by ACT to serve as the Military North Star of the Alliance towards 2040. Together, this package of the best and most forward-looking, forward-leaning military-strategic thinking is a progressive approach for a new generation.

This new thinking addresses temporal, spatial, functional and structural aspects of the Alliance’s approach to warfare development and warfighting.

We face long-term, dynamic and persistent competition from multiple directions. The belligerent nature of Russia is likely to persist. Non-state actors, terrorist groups and organisations, such as al-Qaeda, have proven their longevity and adaptability, and new ones are likely to emerge. Moreover, China is setting its ambition to develop the world’s leading military by 2050, including expeditionary capabilities.

We are starting to understand the nature of this long game much better. The NATO 2030 reflection process and the NWCC’s 20-year horizon attest to this. We now have to think and plan long-term, after decades of discretionary operations and crises ‘of the day’.

We are only starting to make headway towards thinking and acting in a multi-domain, -regional and -instrumental context, while also adjusting to the convergence of physical and non-physical domains. Transposing non-physical domains, like cyber and space, and the pervasive information environment onto traditional warfighting domains (air, land and maritime) leads to a multi-dimensional battlespace: physical, virtual, and cognitive. Developing cohesive strategy in all operational domains in order to be effective within the multi-dimensional battlespace is the key to maintaining decisive advantage against any adversary.

The traditional peace, crisis and conflict paradigm will increasingly constrain our ability to out-think and out-perform an adversary. We need to reconfigure our thinking and approach towards a simultaneous, non-linear paradigm in which we balance our efforts across the operational contexts of shaping, contesting and fighting.

Potential adversaries, both in the physical and non-physical dimensions, are shaping us. Crises in recent years, such as the Sea of Azov blockade and persistent information campaigns against Allies, have shown how other states can act creatively to challenge the Alliance.

It is incumbent on the Alliance to positively and proactively shape the security environment to its own designs and strengths – its ideas, values, partnerships, and integrated military structures – while contesting competitors’ attempts to undermine NATO’s objectives. The Alliance is in an ongoing struggle in the cyber domain and information environment against a variety of actors. It will persist, and Allies must coordinate, develop and act accordingly.

If we agree to the demands of this changing time-space-function equation, we may need to also radically rethink the industrial-era ways of command and control (C2), and of structuring our forces into divisions, brigades, and their equivalents.

With persistent competition, boundless space and simultaneous activity, how do we configure a relevant fighting force today that is effective tomorrow? What does the multi-domain force of the future look like across the whole spectrum of military activity – from C2 through to planning, capabilities, exercises and enablers? How should commanders, leaders, forces and specialists train and prepare for the future fight? What should be the right mix of advanced capabilities, legacy platforms and new, cheap, and expendable technologies, such as swarms of drones?

These significant questions, in response to the widening operating environment described above, require a reinvigorated approach to warfare development. Enter the NWCC.

A concept for the future

The NWCC provides the Alliance and Allies with a ‘North Star’ and organising principle for warfare development for the next 20 years. It focuses on building advantage and ‘pulling forward’ the most important ongoing work towards an ambitious view of the future military instrument of power. Of equal importance, it has identified novel lines of delivery that will further enhance the ability of the NATO military instrument of power to achieve the Alliance’s goals effectively, and maximise strategic choice at the Political level.

It is threat-informed but primarily driven by the Alliance’s own ambition for success. It seeks to put the Alliance in a position to out-think, out-excel, out-fight, out-pace, out-partner, and out-last any threat or challenge. Being able to understand the security environment, take initiative, operate decisively, and foster external relationships, all while acting at speed and ensuring resilience, is the ultimate ambition for NATO. It is through these ‘six-out’ design functions that the Alliance can identify what work to pull forward, while also pointing to those innovative approaches and capabilities that can further build and maintain military advantage.

Building on this ambition, the NWCC offers an organising principle to turn the vision into reality, and a guiding rationale to inform the alignment of Alliance warfare development efforts. It provides a construct by which to proactively shape the security environment, enable the Alliance to contest threats, and maintain and enhance readiness to fight if necessary.

It is tempting to use the metaphor of a race to characterise warfare development. A sprint to develop and deploy a new software before a potential adversary. A marathon to design new doctrines and high-end capabilities. However, as the functional design and the imperatives of the NWCC show, warfare development is rather a number of simultaneous races and marathons of different lengths and intensity.

The NWCC addresses this challenge by setting a realistic path to deliver the level of ambition for warfare development that it sets out. It offers a framework that will allow for a coordinated approach, which comprises:

This combination of an ambitious aspiration and a realistic path forward will help balance the realities of warfare development today, with the warfighting needs of tomorrow. Developed collaboratively across the Alliance, the NWCC provides the roadmap to build and maintain a decisive military advantage while optimising strategic options for political authorities.

Our best military thinking, the NATO Military Strategy and its two implementing concepts, the NWCC and the DDA, set a new baseline for military-strategic advice on the employment and development of the Alliance’s military instrument. It sets a direction of travel for NATO and for Allies to focus, cohere and synchronise efforts.

Recognising the enduring nature of war, the NWCC endeavours to put NATO and the Allies ahead of potential adversaries and to be resilient to strategic shocks and wider challenges. It offers a guiding rationale for building warfare development momentum into the future. With the required agility to deliver our warfare development at the right pace, NWCC will position and posture the Alliance’s military instrument of power to build and maintain decisive military advantage to ensure continued success in the increasingly complex, connected and unpredictable security environment of the coming decades.