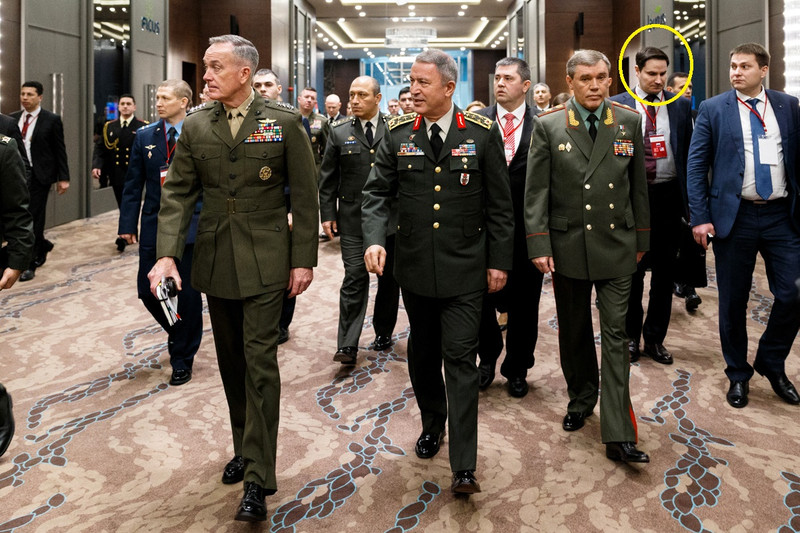 A lieutenant colonel with top-level Kremlin links, a spy-catcher, and a Big Data specialist – the identities of eight Russians recently expelled by Nato from Brussels give clues to why Moscow reacted so harshly and what its operatives were doing.

The eight people who Russia said were “diplomats” at its embassy to the Nato HQ in Brussels were in fact “undeclared intelligence officers” conducting “activities not in line with their accreditation”, Nato secretary general Jens Stoltenberg said while announcing the expulsions last October, euobserver.com wrotes.

Nato never publicly named them, meaning they could quietly go home and be posted to other, non-Nato state locations under diplomatic cover.

Its reaction was seen as an attempt to belittle the Western alliance, as Russia and Nato prepare to hold talks on Russia’s threat of a new war against Ukraine later this week.

But the high-level connections of some of those whom Stoltenberg sent packing indicated the Kremlin’s tantrum might have had a personal dimension.

They showed the importance of Nato’s HQ as a target in Russia’s eyes.

And their CVs shed light on the kind of people Russian spy services were sending to Belgium, where EU and Belgian institutions are also being targeted.

And Smushko was the one with friends in high places.

Smushko, who is of Estonian origin, graduated from the faculty of foreign languages ​​and foreign military information of the Military University of the Ministry of Defence (VUMO) in Moscow, becoming a lieutenant colonel and VUMO deputy department head.

Smushko himself remarked on his first-name terms relationship with Shoigu in an interview with Zvezda, a Russian TV station, in 2015.

“In this kind of work, mutual understanding is the most important thing,” Smushko said.

“It’s easier to work with Sergei Kuzhugetovich [Shoigu]. I always sit to his left … You often have to translate various sayings and proverbs. I’m always ready for this, although, of course, not all Russian sayings are easily translated into English,” Smushko added.

Getting more personal still, Smushko’s wife, Nina, left Belgium together with her husband.

Nina Smushko had, likewise, graduated from VUMO, gained the military rank of captain, and had also worked as an interpreter for visiting military officers to VUMO from Indonesia, Malaysia, and Venezuela, to which Russia exports arms.

“In Russia, unlike in Western services, espionage tends to run in the family,” one Nato country’s counterintelligence officer said.

Meanwhile, Filippenok, who Nato did formally send packing, might have been posted to Brussels to spy on Russia’s own people there, his background indicated.

Russia has some 200 diplomats and consular officials at various missions in Brussels and in Belgium’s second-largest city, Antwerp.

But he was, in reality, likely to have been sent to Belgium to look for traitors in Russia’s own ranks.

Filippenok, who used to live in St. Petersburg in Russia, was, according to Russian phone records examined by the Dossier Center, a member of unit 55297 of Russia’s domestic spy service, the FSB.

And that unit is the FSB’s Military Counterintelligence Directorate for the Western Military District.

Filippenok used to mingle at events in the Brussels bubble.

In September 2018, for instance, he attended a conference on EU peace-building missions hosted by the Centre for European Policy Studies, a leading think-tank.

And in April 2019, he registered to attend a conference on the EU elections at the European Parliament organised by Defend Democracy, an NGO.

But if he was looking for Russian traitors, then some of his fellow spies appeared to have been looking for other kinds of secret.

Epishkin, whom Nato also expelled, seemed, for his part, to be interested in what the West was doing on Big Data.

At some point, he joined Russia’s SVR foreign intelligence service.

And he also used to mingle at events in Brussels, for instance at a so-called ‘Big Data Europe’ seminar in 2017, along with experts in the field from the EU, the US, India, and Japan, public records showed.

Chesnokov, another one of the eight Russian spies, had a similar background.

Prior to his arrival in Brussels, he worked for Antaris-TP, a Russian state-linked firm which carried out scientific research and created databases for Russia’s defence ministry and the FSB.

The VUMO and MAI, where Smushkin and Epishkin studied, are well-known recruitment centres for Russian intelligence.

But so is the Moscow State Institute of International Relations (MGIMO), where Telegin and Demekhin, whom Nato likewise booted out, went to school.

“As a rule, recruiters begin to look closely at students from the first year, and closer to defending their diplomas, candidates are invited to a confidential conversation and made tempting offers to work for the good of the motherland,” a Russian source said.

Telegin subsequently worked for the Russian foreign ministry’s financial department on overseas missions, but was officially paid peanuts for his work, according to his 1999 tax returns.

“This is common practice in intelligence: as if you work in one organisation, but you get your [real] salary in your own account at the place of service [for the intelligence branch],” another Russian source said.

Telegin and Demekin had apartments in government-built compounds in Moscow’s prestigious Rublevskoye Highway and Michurinsky Prospect.

Several of their neighbours were also intelligence officers or military officers, government officials, and employees of Russian state banks, who were sent to foreign embassies or overseas bank jobs, the Dossier Center discovered.

But if graduating from VUMO, MAI, or MGIMO and having an apartment in Rublevskoye or Michurinsky were part of a typical Russian spy’s profile, others were less easy to pick out.

Kovalev, for instance, whom Nato also ejected, was a Muscovite who used to work for the trade union of road transport workers prior to moving to the car depot of the Russian foreign ministry.

And Obukhova, who had been an “advisor” at Russia’s Nato embassy before her expulsion, was born in a working-class village near Noginsk, in central Russia.

She started out mailing advertising catalogues for a Cypriot-German firm called Purchase at Home back in 2002, the Dossier Center found.

She joined the Russian foreign ministry and later became an attaché to Russia’s embassy in Ottawa.

And, prior to going to Brussels, she received a gong from Russian president Vladimir Putin in 2006 for “services in preparing and holding the meeting of the heads of state and government of the G8 member countries in St. Petersburg”.

The 2021 Nato expulsions were the fourth round in recent times.

The weeding-out process began in 2009, when Nato ejected Vasily Chizhov, the son of Russia’s then and current EU ambassador Vladimir Chizhov, as well as another Russian diplomat, Viktor Kochukov, for spying.

It continued in 2015, with an undisclosed number of expulsions – estimated to be 30 or more – in reaction to Russia’s first invasion of Ukraine.

And Nato ejected a further seven Russians in 2018 after Russia tried to assassinate one of its own former spies, Sergei Skripal, using a chemical weapon in the UK.

But for all that, Russia is still said to have plenty of operatives in Belgium.

At least half (about 100) of Russia’s accredited diplomats were intelligence officers, while another 100 or so Russian spies worked under non-diplomatic cover in businesses, think-tanks, and NGOs in Belgium, according to estimates by Western intelligence sources.

And Russia’s spies cooperated with Russian businessmen and criminals in Belgium, as well as those EU nationals who Russia recruited to betray their countries.

Most of the eight Russians who Nato expelled in 2021, and those still left in Belgium, were either from the GRU or SVR.

The GRU is primarily interested in military and military-technological intelligence, while the SVR tends to seek out political secrets.

The GRU is considered more dangerous because its operatives are trained like soldiers and have carried out assassinations and cyber-attacks in Europe.

But the SVR is more elite, its officers are better educated, and undergo longer training in spy-craft.

Nato’s 2021 expulsions were based on information shared by Western states’ counterintelligence services in Nato’s Joint Intelligence and Security Division (JIS).

Nato created the JIS in 2017 at its Brussels HQ in reaction to increasingly hostile Russian and Chinese behaviour.

Belgium’s domestic intelligence service, the VSSE, has the main responsibility for hunting out foreign spies on Belgian territory, according to agreements with Nato and EU institutions.

But the VSSE has fewer than 20 counterintelligence officers specialising in Russia, sources said.

And Belgium and EU institutions have a softer track record than Nato on Russian aggression.

Belgium kicked out just one alleged Russian spy in reaction to the Skripal attack, for instance.

But even a brief look at Russia’s embassies and consulates in Belgium by the Dossier Center was able to identify several more Russian ‘diplomats’ who filed reports to intelligence services in Moscow.

And EU institutions have never declared any Russian diplomats to be persona non grata, the EU foreign service said.

Nato, the Russian foreign ministry, and the VSSE declined to comment.

But one EU diplomat, speaking anonymously, explained why Russian espionage in Nato and the EU’s home city posed a threat.

“Among Western countries’ diplomatic personnel in centres of international diplomacy, there can also be a few representatives of intelligence services,” he told EUobserver.

“But in the Russian missions to Nato and the EU, the number of spies conducting aggressive intelligence operations is strikingly high,” he said.

“And you have to remember that in Russia’s military doctrine and national security strategy, Russia designates Nato as its principal enemy,” he added

“The SVR and GRU carry out political murders, recruit informants and agents, and are, by definition, 100-percent hostile to Nato and the EU,” the diplomat said.