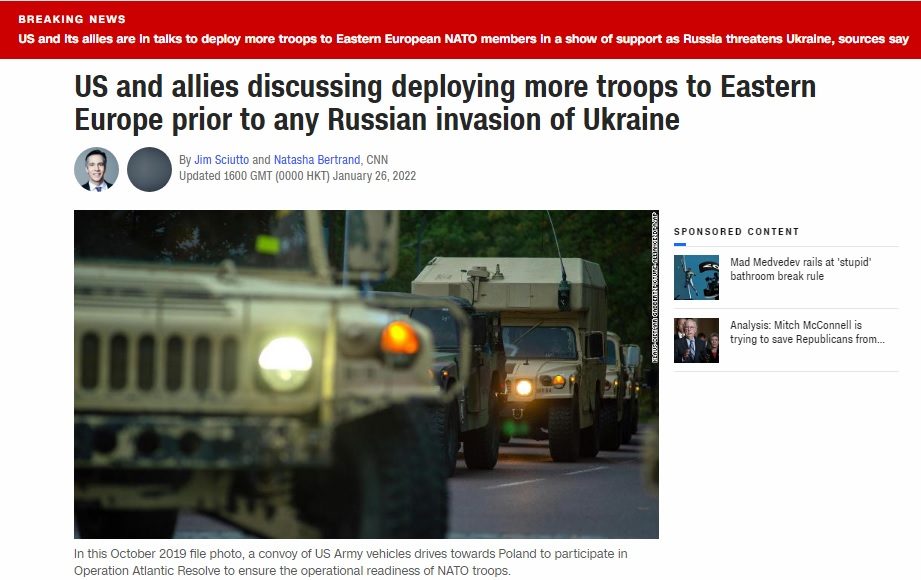 (CNN)The US and a handful of allies are in discussions to deploy thousands more troops to Eastern European NATO countries before any potential Russian invasion of Ukraine as a show of support in the face of Moscow’s ongoing aggression, three US officials familiar with the discussions tell CNN.

Among the countries considering accepting the deployments are Romania, Bulgaria, and Hungary. The deployments would number approximately 1,000 personnel to each country and would be similar to the forward battle groups currently stationed in the Baltic States and Poland.

The US and UK are among those considering the new, pre-invasion deployments, but not all 30 NATO members are willing, according to a European diplomat.

NATO allies have not been entirely on the same page about the severity of the threat, and Germany, for example, has refused to sell new weaponry to Ukraine. Therefore, the US is in discussions to send the additional forces on a bilateral basis or, as one official described it, as a “coalition of the willing.”

Broadly, the US military goal would be to “meet the capability” NATO allies in the region are asking for, another defense official said last week. US forces could operate, as they already do, unilaterally in Europe, but could also operate under existing NATO command structures.

Kirby said the order highlights America’s commitment to the North Atlantic Treaty Organization and its commitment to the common defense. “As [President Joe Biden] has made clear, the United States will act firmly in defense of its national interests in response to actions by Russia that harm us, our allies or partners,” Kirby said during a news conference.

The 8,500 troops are based in the United States and would be part of the NATO Response Force, if that group is activated. The American forces would be in addition to the significant combat-capable U.S. forces already based in Europe “to deter aggression and enhance the alliance’s ability to defend allies and defeat aggression if necessary,” Kirby said.

The NATO Response Force is a 40,000 multinational, multidomain construct. NATO has not yet activated the unit. Within the force is the “very high readiness joint task Force.” This element of about 20,000 includes a multinational land brigade of around 5,000 troops and air, maritime and special operation forces components.

“Secretary Austin has placed a range of units in the United States on a heightened preparedness to deploy, which increases our readiness to provide forces if NATO should activate the NRF or if other situations develop,” the press secretary said.