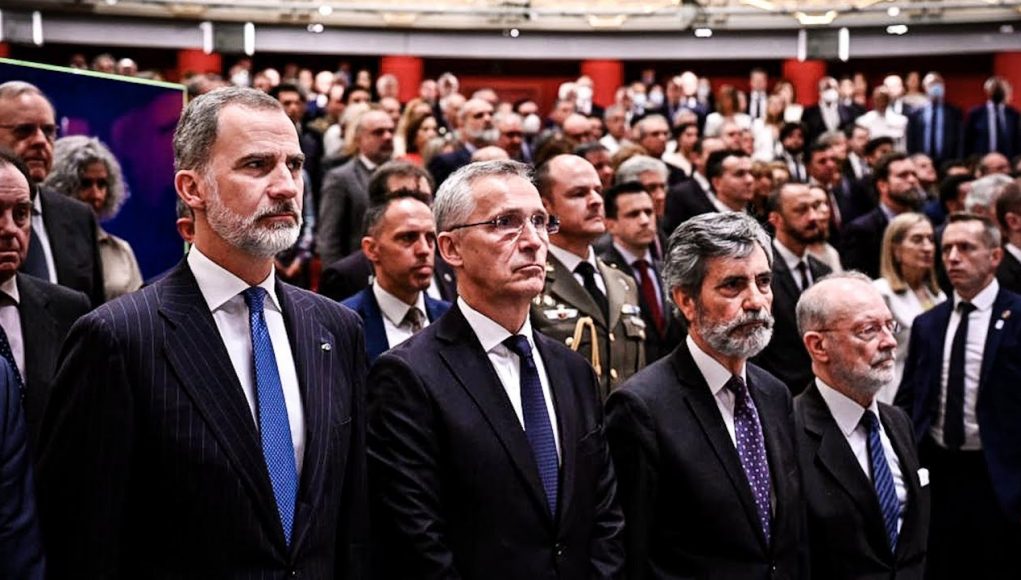 NATO Secretary General Jens Stoltenberg remarks at the ceremony marking the 40th Anniversary of Spain’s accession to NATO, Madrid, 30 May 2022.

Your Majesty, Prime Minister, excellencies, ladies and gentlemen, it is really an honour and pleasure to be here today with you to celebrate 40 years of Spain within the NATO Alliance. And I would like to thank His Majesty King Felipe for his strong personal commitment to our transatlantic Alliance, to our armed forces and to our security. In the late 1970s, after dark, decades of dictatorship, Spain sought a new path. One committed to freedom, democracy, and the rule of law.

Values that lie at the heart of the NATO Alliance. And in 1982, Spain became our 16th member proudly joining a family of free democratic nations across Europe and North America. Let me thank my predecessors who join us today. Willy Claes, Anders Fogh Rasmussen, Lord Robertson, Javier Solana, and Jaap de Hoop Scheffer who could not be with us today. You steered our Alliance through four decades of incredible change from the height of the Cold War, to the fall of the Berlin Wall, from the Balkans Wars to 9/11. And from Afghanistan, to the illegal annexation of Crimea. Throughout these four decades, Spain has stood united with its NATO Allies in maintaining security across the Euro-Atlantic area. Protecting our people and our shared values and helping to change and adapt our Alliance every time the world changed and new challenges arose.

With both Mediterranean and Atlantic coasts, Spain holds a vital strategic position, resting at the crossroads between Europe, Africa, and North America. It is both a border between continents and a bridge between cultures. As such, it plays a central role in protecting us from threats from all points of the compass. Your membership in NATO has made our military more modern, more capable, and more deployable. Over the past four decades, Spain has contributed greatly to our Alliance. You play a key role in NATO’s missions and operations. Spanish forces have helped maintain the stability of the Western Balkans to NATO missions in Bosnia Herzegovina and in Kosovo, they contributed over many years to our mission in Afghanistan, and I thank and honour all those who served so bravely there, those who made the ultimate sacrifice, and their families, and loved ones. Today Spanish soldiers are a crucial part of NATO’s training mission in Iraq to help ensure Daesh never returns. Spanish pilots take part in Baltic air policing. Spanish sailors serve in our maritime missions, and Spain hosts the Aegis Ballistic Missile Defence ships in Rota. This shows that together we are ready to defend every inch of allied territory from any threat from any direction. Whenever I met with Spanish servicewomen and men, I’m always impressed by the dedication and professionalism.

I met some of them recently with Prime Minister Sánchez when he visited NATO’s battlegroup in Latvia, serving alongside Allied forces from both sides of the Atlantic. NATO solidarity in action. And therefore, I would also like to thank Prime Minister Sánchez for his personal leadership within our Alliance. Pedro, your commitment to transatlantic security is and remains vital. And also many thanks to your predecessors for the support of NATO over many, many years. In response to Russia’s brutal and unprovoked war in Ukraine, Spain is playing an important part in strengthening our deterrence and defence. Deploying additional troops, ships and jets to strengthen NATO’s defence of Europe.

You are also providing critical support for Ukraine with security assistance and humanitarian aid to uphold Ukraine’s right to self-defence enshrined in the UN Charter, help end the war and achieve the peaceful solution that Ukraine deserves and we all want. Back in 1997, Madrid hosted an historic summit. Hungary, Poland, and the Czech Republic, were invited to open talks to join our Alliance. Former adversaries became new friends. That summit marked a new age of hope and aspiration. NATO’s open door and the European Union’s enlargement helped spread freedom, democracy, and prosperity across Europe. It was and remains an historic success. Next month, Madrid will host another historic summit. This time however, the context is very different. Not a fresh burst of freedom. But the cold blast of conflict. Russia is waging war of aggression against Ukraine. Authoritarian regimes seek to undermine the rules based international order. China’s coercive policies challenge our interests, security, and values. And China has joined Russia in openly contesting the right of each and every country to choose his own path.

We also face brutal terrorism, instability from the south, sophisticated cyberattacks, disruptive new technologies, nuclear proliferation, and the security consequences of climate change. Together these challenge our security and our democratic way of life. At the Madrid Summit, we will chart the way ahead for the next decade. We will reset our deterrence and defence for a more dangerous world will deepen our cooperation with likeminded countries and organisations, including the European Union and countries in the Indo-Pacific. We will also be joined by Finland and Sweden, who have just made historic applications to join our Alliance. The Madrid Summit is an important opportunity to reaffirm our commitment to NATO’s values and the vital importance of Europe and North America working together in NATO.  As we look to the future, Spain will continue to play a key role in our Alliance, because in this age of increasing global competition, our unity is our strength. Thank you so much.