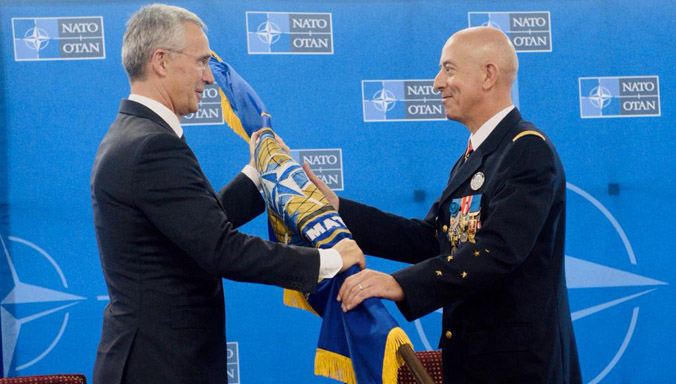 NATO Secretary General Jens Stoltenberg participated in the Change of Command at Allied Command Transformation in the United States on Thursday (23 September 2021) . At the ceremony in Norfolk, Virginia, General Philippe Lavigne of the French Air and Space Force took over from General André Lanata as Supreme Allied Commander Transformation, one of NATO’s two strategic commanders.

The Supreme Allied Commander Transformation leads the transformation of NATO’s military structures, forces, capabilities and doctrines in order to improve the military effectiveness of the Alliance, and makes recommendations to NATO’s political and military authorities.

The Secretary General said: “France is a strong and highly valued NATO Ally, with cutting edge capabilities and highly professional forces.  For over a decade, France has nominated its best officers to take this command.”  He praised both General Lanata and General Lavigne as “great leaders committed to our transatlantic Alliance.”

Mr Stoltenberg highlighted the important work of Allied Command Transformation in helping adapt NATO to new challenges, including emerging disruptive technologies:  “For NATO to be future-proof, we need to keep up with the rapid pace of technological change. Accelerate innovation, so that we remain competitive and retain our edge.”

In recognition of General Lanata’s contribution to the Alliance, the Secretary General presented him with the NATO Meritorious Service Medal.

ACT is comprised of the Norfolk Headquarters and three subordinate entities: the Joint Warfare Centre in Norway, the Joint Force Training Centre in Poland and the Joint Analysis & Lessons Learned Centre in Portugal.

The Headquarters of Allied Command Transformation

The Headquarters of Allied Command Transformation is located in Norfolk, Virginia in the United States. Led by General Philippe Lavigne, a French Air and Space Officer, it acts as a physical symbol of the transatlantic security bond.  The Headquarters has a diverse workforce of approximately 750, who are either from the civilian sector, the military (naval, air force, army), or the military police. It is structured into four directorates:

The Joint Warfare Centre’s (JWC) main task is to train Allied forces at the operational level to ensure they remain interoperable and fully integrated. Its principal mission is the training of the NATO Response Force (NRF) Headquarters’ elements and NRF Component Headquarters’ elements. In addition, it performs collective staff training for partner countries and new NATO members.

The Joint Force Training Centre (JFTC) focuses on joint and combined training of Allied and partner forces at the tactical level. It focuses, in particular, on the conduct of tactical training to achieve joint interoperability at key interfaces – a critically important area identified during military combat in Afghanistan.

As a priority, the JFTC provides expertise to help NATO Response Force (NRF) joint and component commanders ensure that each NRF rotation achieves a high level of interoperability, flexibility and extensive training so as to be combat-ready at the beginning of a cycle of duty.

The Centre cooperates with national training centres, including Partnership for Peace (PfP) Training Centres and Centres of Excellence to ensure the application of NATO standards and doctrine in combined and joint fields.

The main role of the Joint Analysis & Lessons Learned Centre (JALLC) is to reinforce the process of continuous improvement of concepts, doctrine and capabilities within NATO through the transformation process, based on lessons learned from operations, training, exercises and experimentation. As such, the JALLC conducts the analysis of real-world military operations, training, exercises and NATO Concept Development and Experimentation collective experiments, and is responsible for establishing and maintaining a lessons learned database.

US to buy new Abrams tanks for Ukraine because military has no spares, Pentagon says

US to buy new Abrams tanks for Ukraine because military has...