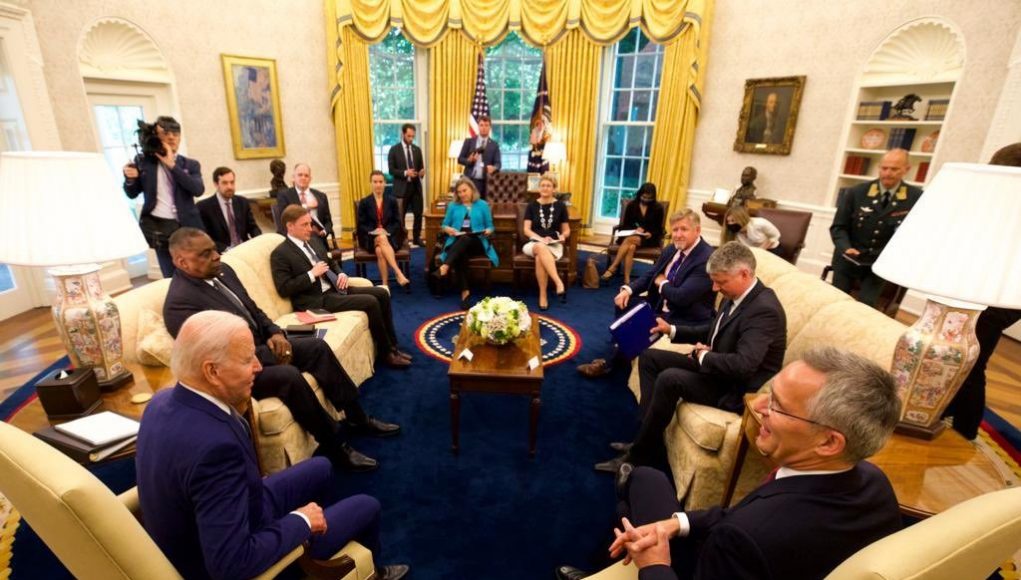 #NATO Secretary General @jensstoltenberg met with @POTUS Joe Biden at the White House on Monday, ahead of next week’s #NATOSummit. They agreed on the importance of strengthening NATO in a more competitive world. #NATO2030, NATO spokesperson Oana Lungescu mentioned on Twitter.

Secretary of Defense Lloyd J. Austin III met with NATO Secretary General Jens Stoltenberg today at the Pentagon in advance of the NATO Summit next week in Brussels.Spotlight: NATO

President Joe Biden and Austin will attend the meeting of the North Atlantic Alliance stressing America’s commitment to collective defense and the need to shape the most successful alliance in history for the needs of the future.

This goes to the core of the Biden administration’s push to repair America’s greatest asymmetric advantage — its unparalleled network of allies and partners around the world. “We will repair our alliances and engage with the world once again, not to meet yesterday’s challenges, but today’s and tomorrow’s,” Biden said at the State Department soon after taking office in January. “American leadership must meet this new moment of advancing authoritarianism, including the growing ambitions of China to rival the United States and the determination of Russia to damage and disrupt our democracy.”

In announcing the president’s European trip, White House Press Secretary Jen Psaki said Biden “will affirm the United States’ commitment to NATO, Transatlantic security and collective defense. The leaders from the 30 NATO nations will discuss how to reorient the alliance and ensure effective burden-sharing,” she said.

At the Pentagon meeting, Austin stressed his support for the NATO 2030 initiative, and “its goal of keeping the alliance strong militarily, and making it … stronger politically and giving it a more global view,” he said. “Obviously, we’re focused on NATO’s top job … maintaining credible deterrence, and being ready to fight and win if deterrence should fail. But so, too, are we focused on ensuring the entire alliance has a comprehensive view of the challenges the trans-Atlantic community faces, and for leading NATO’s adaptation to meet those threats.”

Austin praised Stoltenberg for his efforts to ensure allies share equitably in the defense burden. “As a result of your leadership, Mr. Secretary General, this is a seventh consecutive year of increased defense spending,” Austin said. “I think that’s extraordinary. And I appreciate the emphasis that you placed on this issue.”

During a discussion last week, Stoltenberg called this a “pivotal moment” in the alliance.

NATO is drawing down in Afghanistan ending the alliance’s largest military operation. “At the same time, we are stepping up our response to growing global competition,” he said. “Russia and China are leading an authoritarian pushback against the rules-based international order.”

Russia continues its international adventurism. The nation continues its massive spending on the military and is challenging nations from the Arctic to Africa. Russia is seeking to intimidate its neighbors and suppressing any vestige of opposition at home. And it is a sponsor of “cyber and hybrid attacks across NATO countries,” Stoltenberg said.

China’s growing global position is also a concern to the alliance. “NATO does not see China as an adversary,” Stoltenberg said. “There are opportunities to engage with Beijing on issues like trade, climate change and arms control, but we must be clear-eyed about the challenges China poses.”

China will soon have the largest economy in the world, with the world’s second-largest defense budget and the largest Navy. “It is seeking to control critical infrastructure in our countries and around the world,” the secretary general said. “But Beijing does not share our values. The Chinese authorities have created an unprecedented system of surveillance and control over their own people. They crack down on peaceful dissent and religious minorities, threaten Taiwan, coerce their neighbors and hamper freedom of navigation in the South China Sea.”

Add to these nations the threats of global competition, cyber-attacks, disruptive technologies, terrorism and the proliferation of nuclear weapons and the security environment becomes more complex and more contested, he said.

Stoltenberg is presenting the alliance leaders with NATO 2030 — an ambitious plan to chart the alliance’s way forward through the decade.

At its heart NATO 2030 calls for the alliance to be “the unique and indispensable forum for transatlantic consultations on all issues that affect transatlantic security: Including, for instance, on Syria, Iran, or the South China Sea,” the secretary general said.

The plan calls for a boost in funding for collective defense against all threats on land, sea, air, cyberspace or space. The alliance is well on its way to this goal, he said. “We will rapidly and fully implement our plans to strengthen our military posture, continuing to increase the readiness of our forces, modernize our capabilities and invest more in our collective defense,” Stoltenberg said. “Strong militaries are important. But strong societies are our first line of defense. So we must raise the level of ambition when it comes to resilience.”

#NATO2030 looks to boost transatlantic innovation to maintain the technological edge and fill innovation gaps among the allies.

NATO also must play a role in upholding the rules-based international order, Stoltenberg said. This includes speaking with one voice to defend values and interests and ensuring freedom of navigation.

“Conflict and instability in NATO’s neighborhood directly undermine our security,” he said. The alliance looks to step up training and capacity-building support for partners from Iraq to Jordan, and Georgia to Ukraine.Spotlight: Tackling the Climate Crisis

Overarching everything is the threat of climate change. “Global warming is a crisis multiplier, so NATO must address the security consequences of climate change,” the secretary general said. “My ambition is to have a clear political commitment at the summit to significantly reduce military emissions, contributing to net-zero.”

The summit will also look at NATO’s next strategic concept.

“Through NATO 2030, we are adapting to a more competitive world,” Stoltenberg said. “Our ambitions must be high, as the challenges to our security are great.”