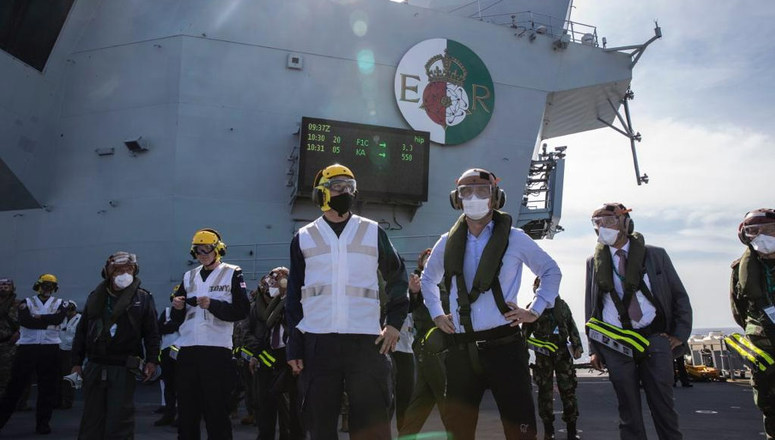 NATO ships, submarines, and aircraft are training off the coast of Portugal to practice NATO’s ability to defend sea lines of communication between North America and Europe. Among the 20 ships participating in exercise Steadfast Defender is the Royal Navy’s flagship aircraft carrier HMS Queen Elizabeth on its maiden deployment.

The NATO Secretary General said the HMS Queen Elizabeth was a powerful demonstration of the United Kingdom’s vital contribution to NATO. “The first aircraft carrier in the world designed to operate fifth generation combat aircraft – from these decks, the Queen Elizabeth projects power to keep us all safe. She carries US Marines. She is protected by a Dutch frigate and she is on her way to the Pacific. So this is a perfect example of Europe and North America working together in NATO for our collective security,” he said.

Exercise Steadfast Defender, which runs from 12 May to 22 June 2021, is NATO’s biggest exercise this year. It aims to test the Alliance’s readiness and military mobility, with forces deploying across land and sea, from North America to the Black Sea region and off the coast of Portugal. Twenty ships, 60 aircraft, 500 vehicles and over 9,000 personnel participate in the exercise, which Mr Stoltenberg said “reflects NATO’s resolve to deter and defend across the Euro-Atlantic area”.

The exercise also involves the deployment of NATO’s 4,000-strong high readiness force to Romania and the simulated rapid movement of allied forces and equipment across Europe. Steadfast Defender 2021 is the first large-scale test of NATO’s adapted command structure, with the involvement of NATO’s two new commands – for the Atlantic in Norfolk, Virginia and for logistics in Ulm, Germany.

Later on Thursday, Mr Stoltenberg attended the Informal Meeting of European Union Defence Ministers in Lisbon for talks on a range of topics, including on further strengthening NATO-EU ties, as well as Russia, Afghanistan and China’s rise.  (www.nato.int)