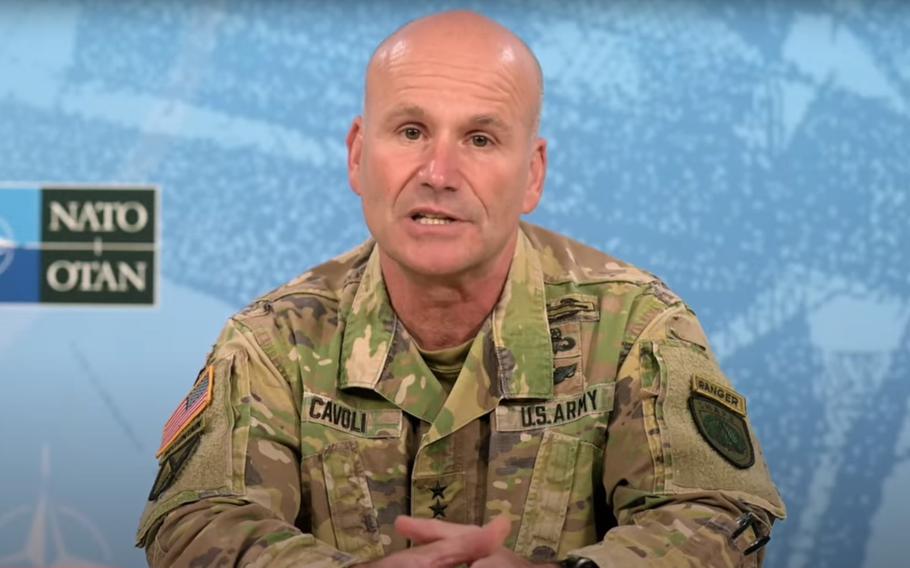 Gen. Christopher Cavoli, NATO Supreme Allied Commander and head of U.S. European Command, said the region-specific plans are being devised to guarantee a rapid response to a crisis.

“This new family of plans … represents an unprecedented level of Alliance planning for defense against threats in the post-Cold War era,” Cavoli said from his headquarters in Mons, Belgium. “Allies have also committed to further develop the full range of ready forces and capabilities necessary to respond to multiple contingencies.”

Cavoli’s comments came at the start of a meeting hosted virtually by the Center for European Policy Analysis that involved military and political leaders considering the implications of Russia’s war on Ukraine.

For U.S. and allied militaries, Russia’s full-scale invasion, which began in late February, has sparked an influx of troops to Poland, the Baltic states and elsewhere.

“Our forces are at a high level of readiness, and we have a strategically advantageous posture,” Cavoli said.

In recent days, thousands of Russians have fled abroad to avoid being drafted into a war that hasn’t gone according to Moscow’s plans. As Ukrainian forces have begun to reclaim territory, the rhetoric out of the Kremlin also has become increasingly alarming.

Repeated nuclear saber-rattling from Moscow, while concerning, should not stop the West from providing the military support required by Ukrainian troops, Twitty said.

“We cannot be deterred by that,” he said. “The Ukrainians have to continue the momentum.”

Retired Lt. Gen. Ben Hodges, a former commander of the Army in Europe, said it appears that Ukraine has achieved “irreversible momentum” against forces that “are exhausted and have lost the will to fight.”

If Ukrainian troops continue to gain ground, Russian-occupied Crimea and its military bases could soon be within range, he said, adding that “then, it’s just a matter of time.”

Still, retired Lt. Gen. Mark Hertling, also a former top Army commander in Europe, cautioned that any battle to retake Crimea will pose challenges for the Ukrainians, given how difficult the peninsula is to access by foot.

So far, Putin also has largely refrained from significantly using his naval forces in the Black Sea, and Russia has not yet deployed its strategic bomber fleet, which could come into play in Crimea, Hertling said.

Reclaiming that territory would entail a tough fight, he said. (www.stripes.com)