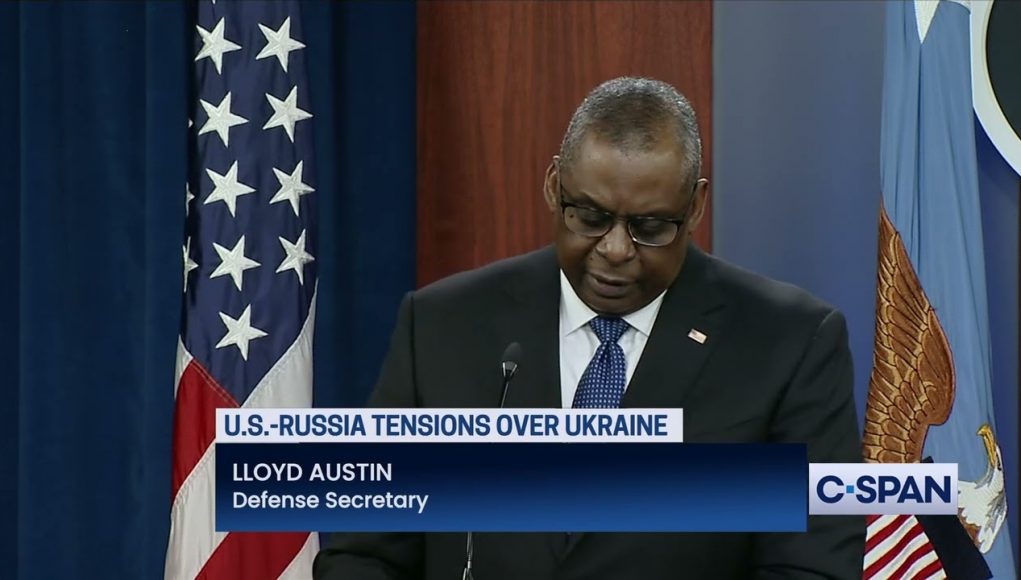 The United States is in lockstep with NATO allies in calling for Russian President Vladimir Putin to de-escalate his country’s situation with Ukraine, U.S. defense leaders said during a Pentagon news conference today.

Secretary of Defense Lloyd J. Austin III stressed that conflict with Russia is not inevitable. “There is still time and space for diplomacy,” the secretary told Pentagon reporters. “The United States, in lockstep with our allies and partners, has offered Russia a path away from crisis and toward greater security, and the Department of Defense will continue to support those diplomatic efforts.”

Austin spoke alongside Army Gen. Mark A. Milley, chairman of the Joint Chiefs of Staff. Both men emphasized the United States’ commitments to NATO allies and in opposition to Russian actions. “Any Russian attack or further incursion into Ukraine would not only ignite conflict, it would also violate the bedrock principles of national sovereignty, territorial integrity and self determination,” Austin said. “This is something that we’re taking very seriously both as a strong partner of Ukraine and as one of 30 members of NATO.”

Since the first Russian incursion into Ukraine and Putin’s illegal annexation of Crimea in 2014, the United States has committed more than $2.7 billion in security assistance to Ukraine. A shipment arrived in Ukraine today, Austin said.

The United States military is taking actions to support NATO allies. Part of that includes reinforcing security on NATO’s eastern flank, Austin said. “We placed thousands of U.S. troops on ‘prepare-to-deploy’ orders earlier this week,” he said. “If NATO activates its response forces, these troops will be ready to go.”

Both Austin and Milley said the 8,500 U.S. troops have not been ordered to go anywhere, yet. The troops will be part of the NATO Response Force if that unit is activated.

Milley said Russia needs to “stand down” from its position. He noted that there are more than 100,000 Russian troops on the border with Ukraine and inside Russia’s only European ally — Belarus. Ukraine is the second largest nation in Europe and has a population of 44 million. “If war were to break out on a scale and scope that is possible, the civilian population will suffer immensely,” the general said.

The Ukrainian military has about 150,000 active-duty troops and a larger number of reservists, Milley said.

Ukraine is a NATO partner, not a NATO member, but NATO leaders have told Putin that any incursion into Ukraine would trigger significant economic and diplomatic costs. “A move on Ukraine will accomplish the very thing Russia says it does not want: a NATO alliance strengthened and resolved on its western flank,” Austin said.

“The United States will contribute to NATO’s response forces. And we will coordinate with our NATO allies. We will make sure that they have the capabilities that they need to defend themselves. Article Five is clear on its point of attack against one NATO member is an attack against us all. And as President Biden has said, the United States holds this as a sacred obligation. And we will do right by that commitment.”

Austin and Milley said that while they do not believe Putin has made the decision to use the troops amassed on Ukraine’s border, he clearly has that capability.

The frontline states of NATO are, understandably, worried about Russian aggression. NATO has significant military capability, Milley said. NATO has more than 130 brigades of maneuver forces, not including U.S. forces, the chairman said. The alliance also has 93 squadrons of high-end fighters, four aircraft carriers, and many more surface combatants. “The military capability of NATO is very, very significant,” he said. (www.defense.gov)