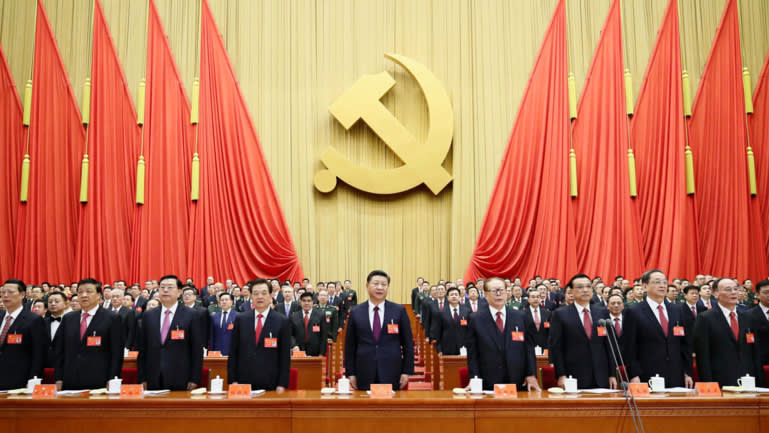 China has begun construction of what independent experts say are more than 100 new silos for intercontinental ballistic missiles in a desert near the northwestern city of Yumen, a building spree that could signal a major expansion of Beijing’s nuclear capabilities.

The acquisition of more than 100 new missile silos, if completed, would represent a historic shift for China, a country that is believed to possess a relatively modest stockpile of 250 to 350 nuclear weapons. The actual number of new missiles intended for those silos is unknown but could be much smaller. China has deployed decoy silos in the past.

During the Cold War, the United States developed a plan to move its ICBMs across a matrix of silos in a kind of nuclear shell game, to ensure that Soviet war planners could never know exactly where the missiles were at any given time.

The construction boom suggests a major effort to bolster the credibility of China’s nuclear deterrent, said researcher Jeffrey Lewis, an expert on China’s nuclear arsenal and part of a team that analyzed the suspicious sites, first spotted by colleague Decker Eveleth as he scoured photos taken by commercial satellites over northwestern China. Lewis described the scale of the building spree as “incredible.”

“If the silos under construction at other sites across China are added to the count, the total comes to about 145 silos under construction,” Lewis, director of the East Asia Nonproliferation Program at the Center for Nonproliferation Studies, part of the Middlebury Institute of International Studies, said in a summary of his findings provided to The Washington Post. “We believe China is expanding its nuclear forces in part to maintain a deterrent that can survive a U.S. first strike in sufficient numbers to defeat U.S. missile defenses.”

The discovery follows recent warnings by Pentagon officials about rapid advances in China’s nuclear capability. Adm. Charles Richard, who commands U.S. nuclear forces, said at a congressional hearing in April that a “breathtaking expansion” was underway in China, including an expanding arsenal of ICBMs and new mobile missile launchers that can be easily hidden from satellites. In addition, the Chinese navy has introduced new nuclear-weapons-capable submarines to its growing fleet.

The reported silo construction project could provide China with yet another means of concealing its most powerful weapons. The construction sites spotted on satellite photos are arrayed in two huge swaths, covering parts of a desert basin stretching to the west and southwest of Yumen, a city of 170,000 people along China’s ancient Silk Road.

Each site is separated from its neighbors by about two miles, and many of the sites are concealed by a large, dome-like covering, following a practice observed at known construction sites for missile silos in other parts of China. At sites where the dome is not in place, construction crews can be seen excavating a characteristic circular-shaped pit in the desert floor. Another construction site appears to be a partially built control center.

Lewis said the silos are probably intended for a Chinese ICBM known as the DF-41, which can carry multiple warheads and reach targets as far away as 9,300 miles, potentially putting the U.S. mainland within its reach. Major excavation work on the sites began early this year, although preparations were probably underway for months, Lewis said.

Emails and faxes seeking comment from China’s Foreign Ministry in Beijing and the Chinese Embassy in Washington did not receive a response.

A Defense Department spokesman declined to comment on the satellite images or to discuss U.S. intelligence assessments of China’s nuclear program. But the spokesman, John Supple, noted that Pentagon reports and analysts have previously raised concerns about the proliferation of China’s missile silos. “Defense Department leaders have testified and publicly spoken about China’s growing nuclear capabilities, which we expect to double or more over the next decade,” Supple said.

Missile silos are easily spotted by trained imagery analysts, and they are vulnerable to destruction by precision-guided missiles in the early hours of a nuclear war. For those reasons, Lewis sees the silo construction project as part of an expanded deterrent strategy by a country whose nuclear arsenal is dwarfed by those of the United States and Russia, which collectively possess more than 11,000 nuclear warheads.

Rather than engaging in an expensive arms race with Washington and Moscow, China has traditionally embraced a “limited deterrence” doctrine that prioritizes a lean but robust nuclear arsenal that ensures Beijing’s ability to retaliate against any adversary if attacked.

U.S.-China space race is heating up

In recent years, however, Chinese officials have complained that their country’s nuclear deterrent is losing credibility because of nuclear modernization programs proposed or already underway in Russia and the United States. Beijing has resisted calls to join new arms-control talks because of fears that new limits would forever enshrine its status as a second-rate nuclear power compared with Washington and Moscow.

Photos of the Gansu construction project were supplied to Lewis and Eveleth by the commercial satellite company Planet, which provided a continuous stream of updated images showing progress at each of the construction sites over time. Based on his analysis, Lewis said, there was “a very good chance that China is planning a shell game” in which it hides a relatively small number of warheads across a network of silos. Still, he said, the sudden appearance of so many new launch sites could increase pressure on U.S. officials to speed up efforts to modernize the U.S. arsenal.

“We’re stumbling into an arms race that is largely driven by U.S. investments and missile defense,” Lewis said. The Pentagon has announced plans for an extensive upgrade of U.S. nuclear weapons and delivery systems over the next two decades, including a new air-launched cruise missile and at least two new types of warheads.

In February, Secretary of State Antony Blinken vowed in a statement that the Biden administration would “pursue arms control to reduce the dangers from China’s modern and growing nuclear arsenal.” He did not explain how that goal would be accomplished but said the administration would seek “effective arms control that enhances stability, transparency and predictability while reducing the risks of costly, dangerous arms races.”

David Crawshaw in Sydney and Alicia Chen in Taipei, Taiwan, contributed to this report.